Differences between the lengths of the upper and/or lower legs are called leg length discrepancies (LLD). A leg length difference may simply be a mild variation between the two sides of the body. This is not unusual in the general population. For example, one study reported that 32 percent of 600 military recruits had a 1/5 inch to a 3/5 inch difference between the lengths of their legs. This is a normal variation. Greater differences may need treatment because a significant difference can affect a patient's well-being and quality of life. 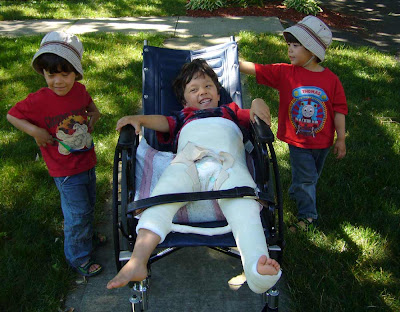 A patient?s legs may be different lengths for a number of reasons, including a broken leg bone may heal in a shorter position, particularly if the injury was severe. In children, broken bones may grow faster for a few years after they heal, resulting in one longer leg. If the break was near the growth center, slower growth may ensue. Children, especially infants, who have a bone infection during a growth spurt may have a greater discrepancy. Inflammation of joints, such as juvenile arthritis during growth, may cause unequal leg length. Compensation for spinal or pelvic scoliosis. Bone diseases such as Ollier disease, neurofibromatosis, or multiple hereditary exostoses. Congenital differences.

Often there are few or no symptoms prior to the age of 25-35. The most common symptom is chronic lower back pain, but also is frequently middle and upper back pain. Same-sided and repeated injury or pain to the hip, knee and/or ankle is also a hallmark of a long-standing untreated LLD. It is not uncommon to have buttock or radiating hip pain that is non-dermatomal (not from a disc) and tends to go away when lying down.

Leg length discrepancy may be diagnosed during infancy or later in childhood, depending on the cause. Conditions such as hemihypertrophy or hemiatrophy are often diagnosed following standard newborn or infant examinations by a pediatrician, or anatomical asymmetries may be noticed by a child's parents. For young children with hemihypertophy as the cause of their LLD, it is important that they receive an abdominal ultrasound of the kidneys to insure that Wilm's tumor, which can lead to hypertrophy in the leg on the same side, is not present. In older children, LLD is frequently first suspected due to the emergence of a progressive limp, warranting a referral to a pediatric orthopaedic surgeon. The standard workup for LLD is a thorough physical examination, including a series of measurements of the different portions of the lower extremities with the child in various positions, such as sitting and standing. The orthopaedic surgeon will observe the child while walking and performing other simple movements or tasks, such as stepping onto a block. In addition, a number of x-rays of the legs will be taken, so as to make a definitive diagnosis and to assist with identification of the possible etiology (cause) of LLD. Orthopaedic surgeons will compare x-rays of the two legs to the child's age, so as to assess his/her skeletal age and to obtain a baseline for the possibility of excessive growth rate as a cause. A growth chart, which compares leg length to skeletal age, is a simple but essential tool used over time to track the progress of the condition, both before and after treatment. Occasionally, a CT scan or MRI is required to further investigate suspected causes or to get more sophisticated radiological pictures of bone or soft tissue.

In some circumstances, the physician will recommend a non-surgical form of treatment. Non-surgical treatments include orthotics and prosthetics. Orthotics are a special type of lift placed in or on a shoe that can be used in the treatment of leg length discrepancies between two and six centimeters. In pediatric patients who have large discrepancies and are not good candidates for other treatment forms, prosthetics can be helpful.

how to grow tall after 18

Surgical treatments vary in complexity. Sometimes the goal of surgery is to stop the growth of the longer limb. Other times, surgeons work to lengthen the shorter limb. Orthopedic surgeons may treat children who have limb-length conditions with one or a combination of these surgical techniques. Bone resection. An operation to remove a section of bone, evening out the limbs in teens or adults who are no longer growing. Epiphyseal stapling. An operation to slow the rate of growth of the longer limb by inserting staples into the growth plate, then removing them when the desired result is achieved. Epiphysiodesis. An operation to slow the rate of growth of the longer limb by creating a permanent bony ridge near the growth plate. Limb lengthening. A procedure (also called distraction osteogenesis or the Ilizarov procedure) that involves attaching an internal or external fixator to a limb and gradually pulling apart bone segments to grow new bone between them. There are several ways your doctor can predict the final LLD, and thus the timing of the surgery. The easiest way is the so-called Australian method, popularised by Dr. Malcolm Menelaus, an Australian orthopedic surgeon. According to this method, growth in girls is estimated to stop at age 14, and in boys at age 16 years. The femur grows at the rate of 10 mm. a year, and the upper tibia at the rate of 6 mm. a year. Using simple arithmetic, one can get a fairly good prediction of future growth. This of course, is an average, and the patient may be an average. To cut down the risk of this, the doctor usually measures leg length using special X-ray technique (called a Scanogram) on three occasions over at least one year duration to estimate growth per year. He may also do an X-ray of the left hand to estimate the bone age (which in some cases may differ from chronological age) by comparing it with an atlas of bone age. In most cases, however, the bone age and chronological age are quite close. Another method of predicting final LLD is by using Anderson and Green?s remaining growth charts. This is a very cumbersome method, but was till the 1970?s, the only method of predicting remaining growth. More recently, however, a much more convenient method of predicting LLD was discovered by Dr. Colin Moseley from Montreal. His technique of using straight line graphs to plot growth of leg lengths is now the most widely used method of predicting leg length discrepancy. Whatever method your doctor uses, over a period of one or two years, once he has a good idea of the final LLD, he can then formulate a plan to equalize leg lengths. Epiphyseodesis is usually done in the last 2 to 3 years of growth, giving a maximum correction of about 5 cm. Leg lengthening can be done at any age, and can give corrections of 5 to10 cm., or more.
Fighting Fallen Arches »
Profile

Login to quote this blog

You cannot quote because this article is private.